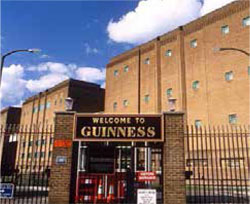 The existing Guinness power station consisted of 4 no. boilers, fired on either Gas Oil or Recovered (waste) Oil.

The boilers were converted coal-fired boilers, and had reached the end of their commercial life cycle, with only three of the boilers operational in 2001.
The project scope included boilerhouse installation, natural gas pipeline planning and installation, fuel oil storage and pumping, steam pressure reduction, and live integration into the existing water and steam systems at the site.

Due to environmental and legislative restrictions in the greater London area, the project was a fast-track intallation. The design-to-commissioning duration was just 3 months, with a commissioning date of 1st October 2001.