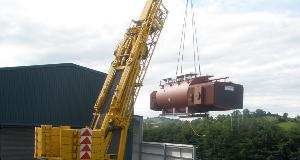 Fingleton White have been appointed by Lakeland Dairies, Bailieboro, Co. Cavan to design, assemble, supply, install, commission a second Combined Heat and Power (CHP) facility at their Bailieboro site. Lakeland Dairies http://www.lakeland.ie/  is a major dairy processing co-operative which operates within a fifteen county catchment area across the northern half of Ireland. The Bailieboro plant provides an ideal host for a second CHP facility.

The second CHP facility to be installed will utilise a 5MW Gas Turbine package and 30T/hour waste heat boiler which will sit alongside existing CHP that was installed in 2009.  The CHP facility is being installed in line with Lakeland Dairies Dyer / Evaporator plant expansion. The additional CHP unit will meet the increased electrical and heat requirements for the new plant expansion.  The CHP will be operational in Q1 2016.